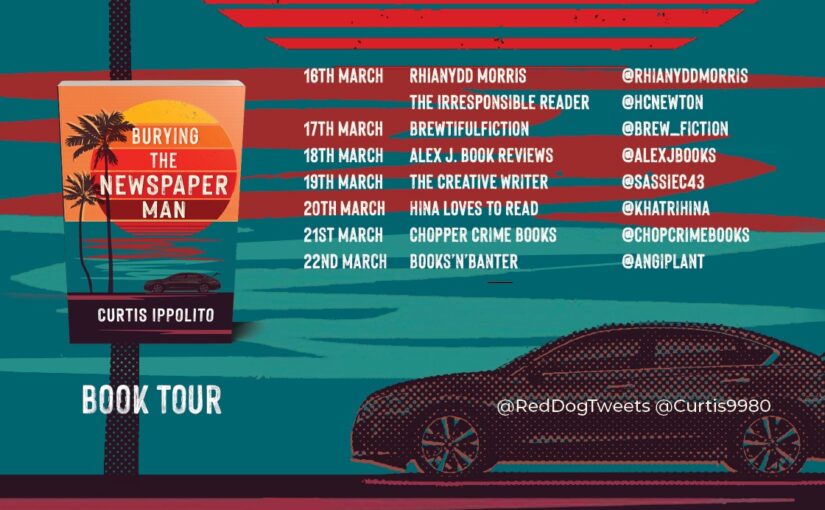 Welcome to my part of the Book Tour!

Burying the Newspaper Man is not the type of book I read very often. It is not a genre that I would normally choose to read, but as part of a Book Club, we have sometimes had books that are similar and I have previously enjoyed them. A dead body. A dark past. An ordinary man with everything to lose.

Marcus Kemp is a regular beat cop living a normal life in San Diego, California. Until the day he makes a shocking discovery: a dead body in the trunk of a stolen car. Worse, the victim turns out to be the man who abused him as a child.

Marcus instinctively wants to help the killer get away with murder and, disregarding his police oath, will stop at nothing to make it happen. With both his job and freedom in jeopardy, his investigation leads him to an unexpected killer, and Marcus is soon faced with an impossible decision.

Can he finally bury the past before it drags him under?

The book began quite slowly for me and I found it a little hard to get into the writing style at first. A warning: it does contain a description of an adult’s abuse of a child and this could awaken some unwanted feelings in some readers. By about halfway through, I was getting into the rhythm of the writing and enjoying the book.

Marcus is a damaged character through his childhood experience and this affects everything in his life particularly his relationship with his girlfriend, Megan. The reader does not see Marcus in his normal day to day life. We only see him as reacting to this unexpected event in his life and everything he does after that is affected by that event. The character of Marcus makes the premise quite believable in the steps that he chooses to take and when events take control, he finds that training takes over.

As the book reached its zenith, I found it genuinely exciting. I enjoyed the last three or four chapters immensely and I would recommend sticking with it as the ending is really good. I would recommend this book and I suggest you give it a try, particularly if you normally like this kind of book.

Curtis Ippolito lives in San Diego, California, with his wife. He is a communications writer for a nonprofit biological research facility. He has previously been a writer in the health care industry and is a former newspaper reporter. Follow him on Twitter @curtis9980.